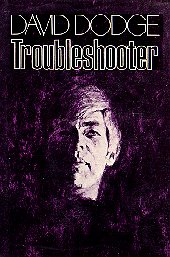 In Troubleshooter we discover what happened to John Abraham Lincoln after his Hooligan Hong Kong experience -- three years in a Communist Chinese prison on a charge of murder. Following his release, the examination and explanation of which occupies Book One of the novel, Lincoln is sent to South Africa to discover the truth behind rumors of a new source of diamonds that are illegally flooding the American market.

In South Africa Lincoln meets Paul Herzog, the most powerful individual in the country. It quickly becomes apparent that Herzog and his cronies, known secretly as the Twelve Apostles, are staunch proponents of apartheid and seem to be bent on bringing about a full-scale race war.

In what becomes a mission to bring about Herzog’s downfall, Lincoln is assisted by “Glorious Gloria,” a woman he meets on the boat to South Africa, and Sheila, Herzog’s Johannesburg maid.

Following the publication of Troubleshooter, which can be read as a treatise against the evils of apartheid and racism, David Dodge was declared persona non grata in South Africa -- something of which he was fiercely proud. The novel is dedicated to “Sheila.” The character of Sheila in the book is based on a Cape Malay woman who worked as a maid for the Dodges when they lived in Capetown in the early 1960’s. They continued to send money to her for years after leaving South Africa.