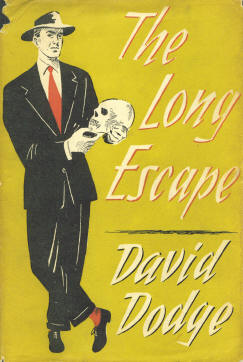 In The Long Escape, David Dodge introduces his second series character, Mexico City-based private investigator Al Colby. Colby is hired by a Los Angeles attorney to find one Robert R. Parker, who deserted his wife and $250,000 worth of property in Pasadena five years ago. The wife doesn’t want him back; she just wants clear title to the property. Colby’s job is to find him—dead or alive—and either prove him dead or persuade him to contact the attorney in order to sign the necessary documents transferring the property. The attorney had been able to trace Parker to Mexico City.

Colby picks up the trail in Mexico City and follows it through Central America to Santiago, Chile, where he makes the acquaintance of the beautiful socialite María Teresa (Terry) Ruano, her brother Fito, and her father don Rodolfo. He also meets Ann “Idaho” Farrell, a fellow norteamericana working in the Santiago branch of the National City Bank. Colby learns that Parker is really Roberto Ruano Parker, don Rodolfo’s brother, and that he is dead and buried on the Ruano fundo near Melipilla. Before he can unravel all of the Ruano family’s mysterious secrets, Colby gets shot at in Antofagasta, breaks into Roberto’s tomb—with help from a little distraction created by Idaho—slugs it out with Víctor Chavarría (the tough vaquero who runs the Ruano ranch), and lands in a Chilean calabozo.