The action begins in David Dodge’s final Whit Whitney mystery when Barney Steele, “wearing a two hundred dollar suit, a thirty dollar hat, and a glossy black beard that made him look very little like the crook he was,” comes to Whit’s office seeking tax advice regarding income derived from illegal activities. Steele owns a tuna clipper, the Sea Witch, that he uses to smuggle marijuana from Mexico into San Francisco.

When Whit begins to suspect the source of Steele’s extra income, he sets him up so that the cops, who have never heard of Barney Steele, can get a look at him. Whit pretends to be interested in Steele’s problems in order to stall for time and get as much information out of him as possible. When Steele realizes that Whit has no intention of working for him, he retaliates by having his strong-arm man Tony Barreiro and two “zoot-suiters” work him over. 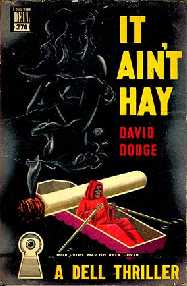 Whit then sets out on a course of revenge—he agrees to help the police secure evidence against Steele on the condition that he get a few minutes alone with him before the cops pinch him—that strains his friendship with Lieutenant Webster, endangers his marriage, causes him to experiment with “hay,” and leads him into a brief relationship with a beautiful Spanish dancer, who happens to be Tony’s girl.

Whit, Webster, officers from the Justice Department’s Division of Narcotic Enforcement, and Iris Powell—widow of Elmo Powell, the man Steele eventually hires to do his tax return—are all on hand when Steele returns to Half Moon Bay after his latest “fishing trip.” During the raid that leaves Tony on ice (literally) in the refrigerator well of the ship and Steele’s hatchetman Joe Gutter dead, Whit exacts his revenge in the wheelhouse of the Sea Witch.

This novel signals Dodge’s shift away from the “screwball” school of mystery writing—leaving all comparisons to Dashiell Hammett’s The Thin Man behind—and towards a more hard-boiled approach. Much of the witty banter between Whit and Kitty that was so prevalent in the earlier Whitney novels is missing from this one. With Whit’s descent into drugs, revenge, and infidelity, it is certainly Dodge’s darkest novel.