With Hooligan, David Dodge introduces his last series character John Abraham Lincoln, a member of the U.S. Treasury Department’s Special Service Bureau, informally known as the “Hooligan Squad.” In the line of hooligan duty, Lincoln functions as bodyguard to certain American VIPs and institutions, among them the currency of the United States. It is this institution which sends Lincoln to Hong Kong. His mission is to stop Everett Fung, a Chinese financier believed to be working for the Communist government, from collecting $100,000,000 in U.S. dollars that have come to the colony as insurance settlements for damages caused by typhoon Xanthippe. 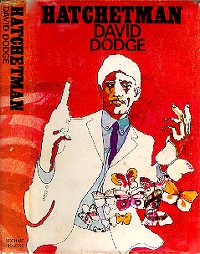 “Another thing that came easier to [Lincoln] than to more experienced gunners was the hooligan shooting stance. An S.S. man could always be identified on the small-arms range by the way he stood; square on to his target, legs spread, arms wide, body forward, the picture of a frontier sheriff facing it out against the bad guys in a saloon. The position was an open invitation to return fire in the chest, belly or throat. More orthodox shooters stood in profile to the line of fire, making minimum targets of themselves, protecting vital organs with rib cage and flesh where no better cover was to be had. Hooligans never accepted cover. They provided it. And because the responsibility was perpetual and uninterrupted, like the function of a beating heart, they went perpetually armed night and day, on duty or off, in their own time as during the hours that were not their own.” (Chapter 3)

Lincoln’s special talents lie in the use of an Army-issue .45 caliber Colt automatic pistol. As the novel opens, Lincoln has been on non-stop hooligan duty for nine years, never having been called upon to actually fire his weapon at another human being. The strain of being constantly ready to kill or be killed has begun to take its toll and Lincoln’s doctor is ready to recommend that he be removed from active duty. How Lincoln accomplishes his mission, opposed along the way by the beautiful Ngan Hong, and what role his prior experience and training play provide for drama, suspense, and a remarkably shocking conclusion.