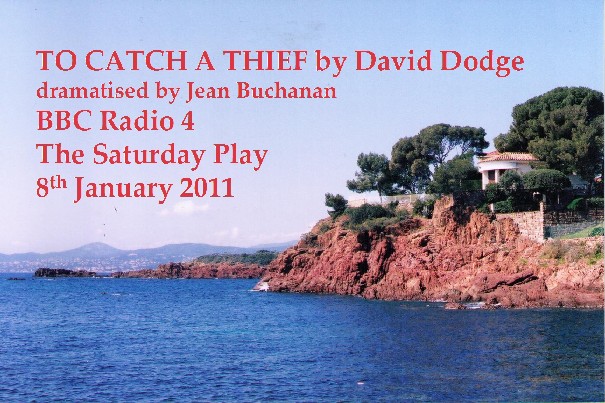 With preceding BBC Radio 4 Arts Feature
IN SEARCH OF THE VILLA NOEL FLEURI
An attempt to find the villa in the South of France where David Dodge was living when he wrote the novel
Broadcast date: January 6, 2011
BBC Press Release | Program Description

American writer David Dodge is the author of the novel behind Alfred Hitchcock’s iconic 1955 film, in which the Côte d’Azur is as stunningly beautiful and glamorous as the stars, Grace Kelly and Cary Grant.

It is the story of John Robie, American expat and former cat-burglar turned Resistance hero, who has to prove that he is innocent of committing a recent string of burglaries by catching the thief who is duplicating his methods. He assumes a new identity to pursue the thief, poses as an American tourist at the local grand hotel (the Carlton, in the film) and makes the acquaintance of beautiful American oil heiress Francie Stevens, who susses his real identity, then finds herself falling in love with him...

Jean Buchanan’s adaptation of To Catch a Thief (the novel, 1952) is directed in Bristol by Sara Davies and stars Jeff Harding as John Robie and Jennifer Lee Jellicorse as Francie Stevens. Other members of the cast are Laura Brook, Aurelie Amblard, Alun Raglan, Simon Armstrong, and Martin Sorrell.

The Hitchcock film differs considerably from the novel, which was inspired by a real incident—a jewel-robbery at a very grand villa near the modest villa that Dodge and his wife were renting. The police even suspected David Dodge, then recently arrived in France, of being the daring cat-burglar. With the assistance of Randal Brandt and Dirk Dominick, Jean Buchanan attempts to find the Dodges’ villa in the BBC Radio 4 Arts Feature In Search of the Villa Noel Fleuri, produced by Marya Burgess. 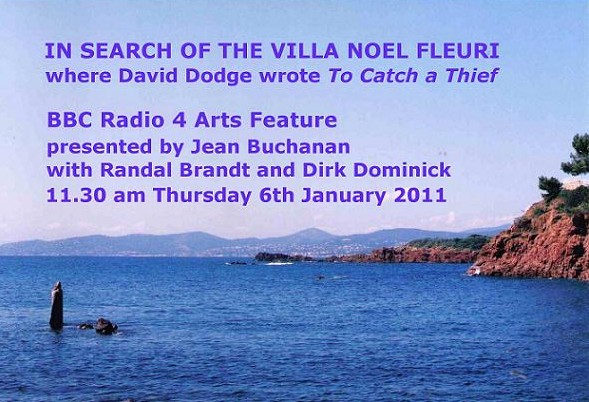