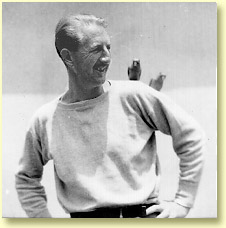 Note: A shorter version of this biography can be found on Wikipedia

David Francis Dodge was born on August 18, 1910 in Berkeley, California. He was the youngest child of George Andrew Dodge, a San Francisco architect, and Maude Ellingwood Bennett Dodge. Following George’s death in an automobile accident, Maude “Monnie” Dodge moved the family (David and his three older sisters, Kathryn, Frances, and Marion) to Southern California, where David attended Lincoln High School in Los Angeles but did not graduate.

At the age of sixteen, he took a job as a messenger at Citizens National Trust & Savings Bank of Los Angeles and began night school classes at the American Institute of Banking. In 1931, after moving up to the position of supervising the bank’s commercial books, he quit the bank to become a marine fireman on a South American run for the Grace Steamship Company. In 1933, he came ashore to work as a stevedore and night watchman for Tubbs Cordage Company in San Francisco. In 1934, he went to work for the San Francisco accounting firm of McLaren, Goode & Co., becoming a Certified Public Accountant in 1937.

On July 17, 1936, he was married to Elva Keith, a former Macmillan Company editorial representative, and their only daughter, Kendal, was born in 1940. After the attack on Pearl Harbor he joined the U.S. Naval Reserve and earned his first commission in October 1942 in the Office of Supervisory Cost Inspector, 12th Naval District, San Francisco. He emerged three years later with the rank of Lieutenant Commander.

David Dodge’s first experience as a writer came through his involvement with the Macondray Lane Players, a group of amateur playwrights, producers, and actors whose goal was to create a theater purely for pleasure. The group was founded by George Henry Burkhardt (Dodge’s brother-in-law) and performed exclusively at Macondria, a little theater located in the basement of Burkhardt’s house at 56 Macondray Lane on San Francisco’s Russian Hill. Other regular company members included Morris Shaw, Kathryn Dodge (Dodge’s sister and Burkhardt’s wife), Frances Montgomery, Steve Broder, Harvey and Edith Muldoon, Whitney Henry, Enola Barker, Lettie Connell (Kathryn Dodge Burkhardt’s daughter), and Elva Dodge. His publishing career began in 1936 when he won First Prize in the Northern California Drama Association’s Third Annual One Act Play Tournament. The prize-winning play, “A Certain Man Had Two Sons,” was subsequently published by the Banner Play Bureau, of San Francisco. Another Dodge play, “Christmas Eve at the Mermaid,” co-written by Loyall McLaren (his boss at McLaren, Goode & Co.), was performed as the Bohemian Club’s Christmas play of 1940, and again in 1959. In 1961 the Grabhorn Press published the play in a volume entitled Shakespeare in Bohemia.

His career as a writer really began, however, when he made a bet with his wife that he could write a better mystery novel than the ones they were reading during a rainy family vacation. He drew on his professional experience as a Certified Public Accountant and wrote his first novel, Death and Taxes, featuring San Francisco tax expert and reluctant detective James “Whit” Whitney. It was published by Macmillan in 1941 and he won five dollars from Elva. Three more Whitney novels soon followed: Shear the Black Sheep (Macmillan, 1942), Bullets for the Bridegroom (Macmillan, 1944) and It Ain’t Hay (Simon & Schuster, 1946), in which Whit tangles with marijuana smugglers. With its subject matter and extremely evocative cover art on both the first edition dust jacket and the paperback reprint, this book remains one of Dodge’s most collectible titles.

Upon his release from active duty by the Navy in 1945, Dodge left San Francisco and set out for Guatemala by car with his wife and daughter, beginning his second career as a travel writer. The Dodge family’s misadventures on the road through Mexico are hilariously documented in How Green Was My Father (Simon & Schuster, 1947). His Latin American experiences also produced a second series character, expatriate private investigator and tough-guy adventurer Al Colby, who first appears in The Long Escape (Random House, 1948).

Two more well-received Colby books appeared in 1949 and 1950. Dodge drew on his experiences living in Arequipa, Peru and his travels around South America to give these novels their locales. In 1950, the Dodge family relocated to the south of France, which, of course, provided the background for his most famous novel, To Catch a Thief (Random House, 1952). With this book, Dodge abandoned series characters and focused on stand-alone suspense adventures set in exotic locales around the world. To Catch a Thief was also Dodge’s greatest career success, primarily due to the fact the Alfred Hitchcock purchased the film rights before the novel was even published and turned it into the 1955 Paramount film starring Cary Grant and Grace Kelly.

In 1952, the Dodges returned to the United States, staying for a time in Burlingame, California, before settling down semi-permanently in Princeton, New Jersey. Dodge picked Princeton because it was centrally located to both his New York and Philadelphia publishers. After Kendal graduated from high school in 1957 and went off to Wellesley, they sold their house and started traveling again.

For the remainder of his career, Dodge alternated between mystery and travel writing, continuing the saga of the Dodge family as they bumbled and bargained their way around the world. The Poor Man’s Guide to Europe, a “tipsheet for nickel-nursers and skinflints” appeared in 1953 and was so successful that Random House issued annual revised editions from 1954 to 1959. It was also a Book-of-the-Month Club selection. Although this book was a more traditional—and practical—travel book, it too was liberally sprinkled with anecdotes of the Dodge family’s personal experiences. He also wrote numerous travel articles for various magazines, appearing as a regular contributor to Holiday Magazine from 1948 to 1968.

In 2005, Hard Case Crime reprinted Dodge’s second Al Colby novel, Plunder of the Sun, and in October 2006 published his last completed novel, The Last Match. The manuscript, which remained unsold at the time of his death, was discovered among his papers and is the first new Dodge material to be published in 35 years.